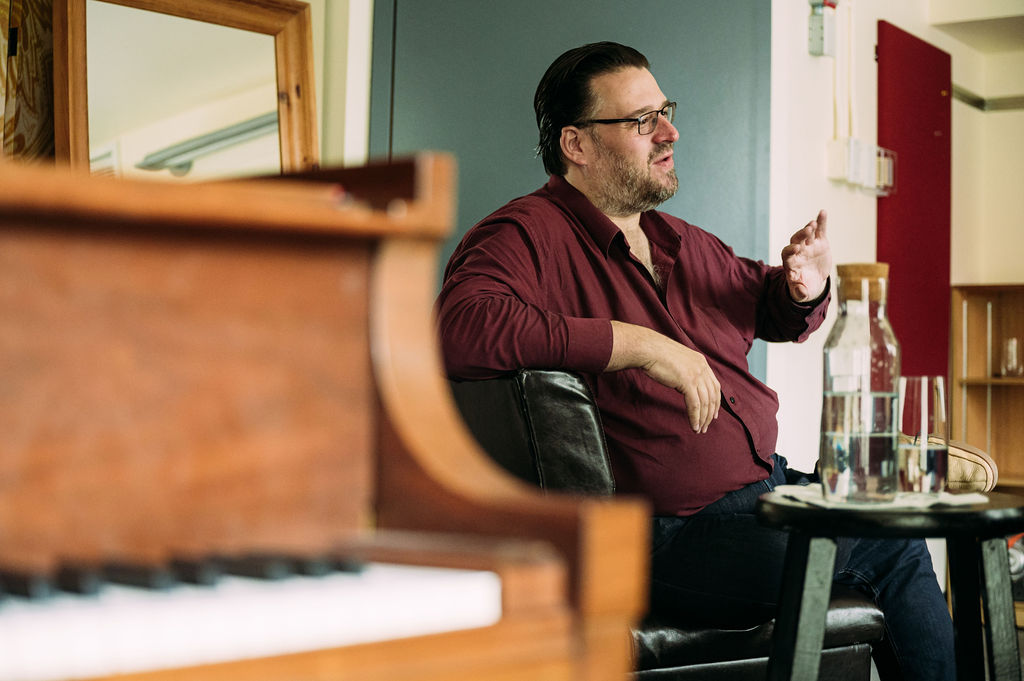 As an avid lover of literature, Éric Champagne was already somewhat familiar with the world of Marguerite Yourcenar when Hélène Dorion reached out to him, in 2020, to compose the music for the opera Yourcenar: une île de passions, which she was co-writing with Marie-Claire Blais. After reading a first draft of the libretto, the composer plunged right in and agreed to set this exceptional woman’s story to music. The result? All will be revealed on stage this summer, in Quebec City and Montreal.

We chatted with the enthusiastic, erudite, humble, and profoundly human composer…

The specificities of composing for voice

While it is not his first foray into the world of opera, Yourcenar: une île de passions represents a cornerstone in its creator’s career. “It was the first time I worked on an opera of this length, based on a libretto that was still in the process of being written.”

What distinguishes his writing for voice from his orchestral composition? “It’s a completely different way of thinking about music,” states Éric Champagne. “When I compose for voice, I seek out certain vocal colors, and the rhythm of the words influences the rhythm of the music,” explains the composer. “I enjoy taking text to another level and modulating it through my music.”

For this opera, the composer waited until the libretto was practically finished before sitting down to his worktable, nevertheless having actively participated in the creative process that preceded the composition stage. “I wanted to get a clear understanding of the work’s structure and find the right balance to go from one scene to the next,” he explains. In this case, the dynamics and the temporality of the dialogue had a great influence on his way of developing the music. “The second act calls for greater linearity, while the first is made up of flashbacks… it’s a bit more broken up.” 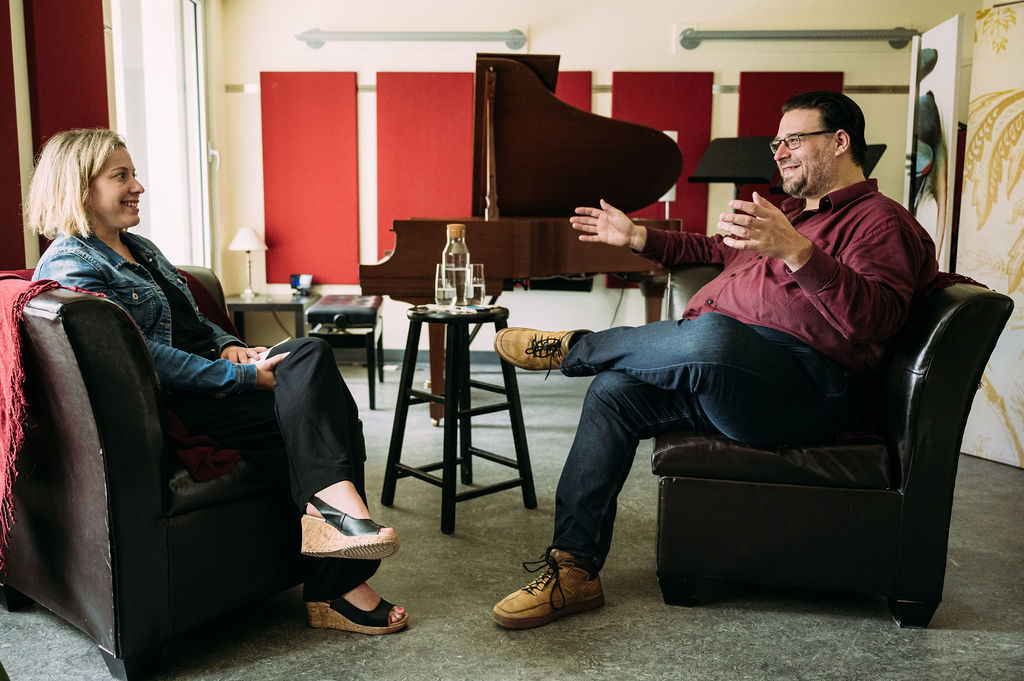 A collaborative process, first and foremost

When the composer joined the project, the two librettists had already been working together for several months; soon after, Angela Konrad joined the creative core as stage director. “After having seen a few of her plays, it was clear to me that she was highly attuned to the use of music in theatre,” says Éric Champagne. “I think it’s natural that this led her to work with opera.”

The collaboration with Les Violons du Roy, the Opéra de Québec, and the Opéra de Montréal subsequently came together. Michel Beaulac, Artistic Director of the Opéra de Montréal, then took part in some writing sessions to rework the text. “He really restructured the work, anchoring the central point of the opera.” And while the composer himself didn’t dip his toe into the actual writing—“I have too much admiration for the craft!”—, he did reveal the operatic potential of certain scenes that were reworked accordingly.

The highs and lows of the creative process

What was the greatest challenge the composer faced over the course of the experience? The time constraint, which forced him to write a piano-voice version of his music before developing the orchestral version. “It was necessary, so that the work could move forward, but it runs contrary to my approach to conceiving music, which is orchestral. I felt like I was writing a watered-down piano version, lacking the colours I had in mind. It blocked me on occasion,” says the composer.

But this constraint proved necessary to the success of the creative workshops with the singers, workshops that gave Éric Champagne an opportunity to hear the music and see it evolve. “As difficult as it was, it allowed me to get to the bottom of things. We were able to work on the voices, I adjusted details of the prosody, I rewrote certain passages. I don’t often get the chance to experiment that much, and I really appreciated it.” 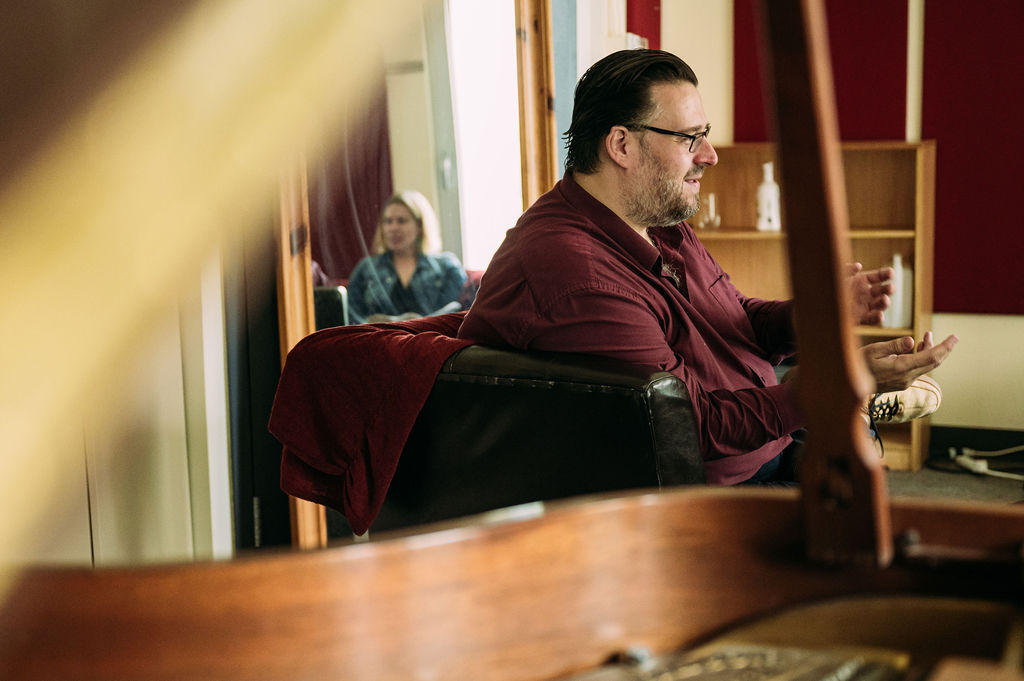 The more the opera’s creative process moved forward, the more the composer could feel a kinship between his creative realm and that of the writer whose world he was setting to music. “We both have one foot firmly rooted in tradition and the other in modernity. In my music, I am not seeking the epitome of the avant-garde; I am seeking, through a heritage I have made my own, to have a personal discussion on my current reality. And it’s the same with Yourcenar.”

Éric Champagne also sees himself in the challenges the writer faced throughout her life. “Yourcenar is, in a way, a lover of love, and the difficulty in reconciling her lover’s passion with her creative passion touches me deeply, because I can identify with it.”

Going with the flow

What can the audience expect at the performances? “It won’t be Aida!” exclaims Éric Champagne. “The show won’t be visually flamboyant; the work isn’t designed for that. It’s more of a psychological drama. As a spectator, you’ve got to let yourself go with the flow of the music and the story to really experience what these characters have within them. It’s an intimate show, one in which you are guided along on an inner journey.”

In this understated, poetic world, the destiny of a literary legend—confronting her dualities, steadfast in her convictions, and breaking with the conventions of her time—will have all the space it needs to unfold and, in the end, to touch us.