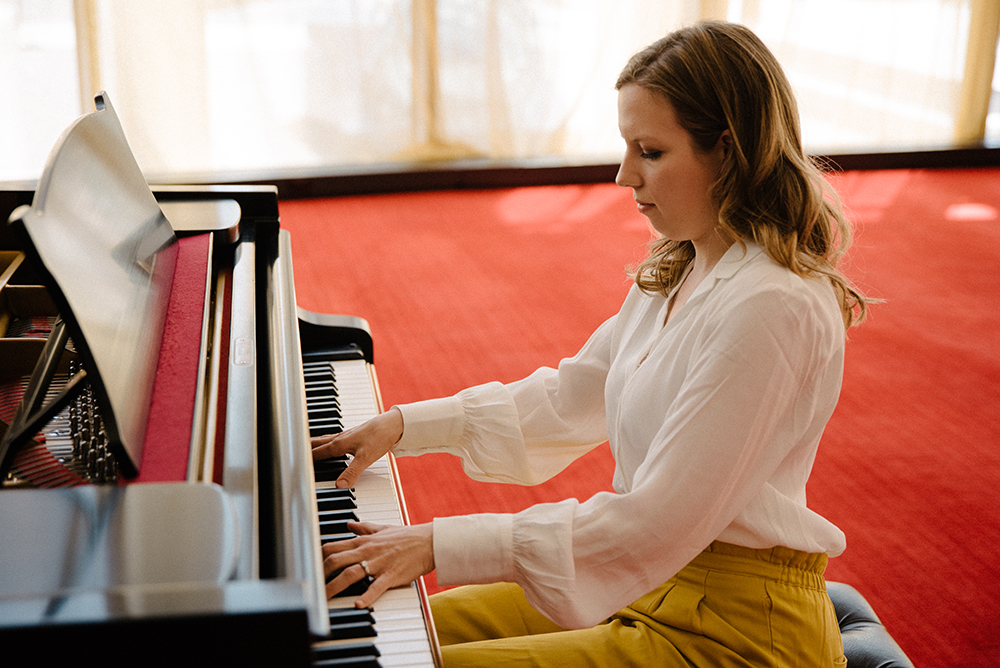 With her little Madeleine, barely three months old, wrapped in her arms, Andrea Van Pelt settled with her husband in Montreal in the fall of 2020. On the program: begin her residency with the Atelier lyrique de l’Opéra de Montréal in January 2021. Whoever said that a career and a young family could not go hand in hand? Certainly not Andrea, and still less the Atelier team, who affectionately supported her in this venture.

A curious and enthusiastic young woman

Inspired by an older cousin who was learning the piano, Andrea expressed her own desire to take lessons when she was five years old. Her first teacher was her aunt. “I always continued to play, but I never really thought I could make a career out of it until I got to university.” Education, history, theatre, sciences, everything interested her. In her first year of university, she explored performance further and decided to embrace a career in piano while also completing a minor in English literature.

Lieder and opera: the perfect union of music and words

After finishing her Bachelor Degree in performance at the University of Toronto, the pianist left for Montreal to embark on a Master’s Degree at McGill University. There, she made the acquaintance of Michael McMahon, who encouraged her to attend the summer internship at the Franz-Schubert-Institut in Austria. “I was interested in working with singers but had never explored that before. That internship completely changed my life. It was there that I realized there was a place for me in the field.” While she enjoyed playing solo, she felt that something was missing. Collaborating with singers was so fulfilling that she gladly immersed herself in words and poetry. “It enables me to combine my two passions, music and literature, and what is more, it’s a proper job!”

The following summer, again on the advice of Michael McMahon, she began to explore opera, a world that initially had not made its full mark on her: “I had no interest in it. But I gave it the benefit of the doubt, I went to do a training program at Opera NUOVA and I fell under its spell. Now I enjoy opera just as much as lieder.”

Having found her vocation, she made her way back to her hometown to complete a second Masters Degree at the University of Toronto, but this time in collaborative piano. She went on to work as a coach with voice students at the bachelor’s and master’s levels. She soon began to miss opera and joined the Vancouver Opera’s Yulanda M. Faris Young Artists Program. Following a few years later in the same path as her friend Holly Kroeker, she then auditioned for the program at the Atelier lyrique that she had heard so many rave about. “The Atelier’s reputation is second to none, everyone knows that it is the place to go. I was really excited to be able to join.”

A lovely surprise that shook up her plans

At about the same time as her audition to join the Atelier lyrique, Andrea found she was expecting a baby. It was certainly a bit of a surprise, but she welcomed the prospective birth with great joy. “When I found out I had been accepted to the Atelier, I immediately advised Chantal [Lambert] of the situation. I wanted to start a family but giving up on my career was out of the question and I did not want to miss out on the opportunity I was being offered here. Chantal is an incredible woman, understanding and profoundly human. She told me that what had happened was one of the greatest gifts and that I could take all the time I needed.” 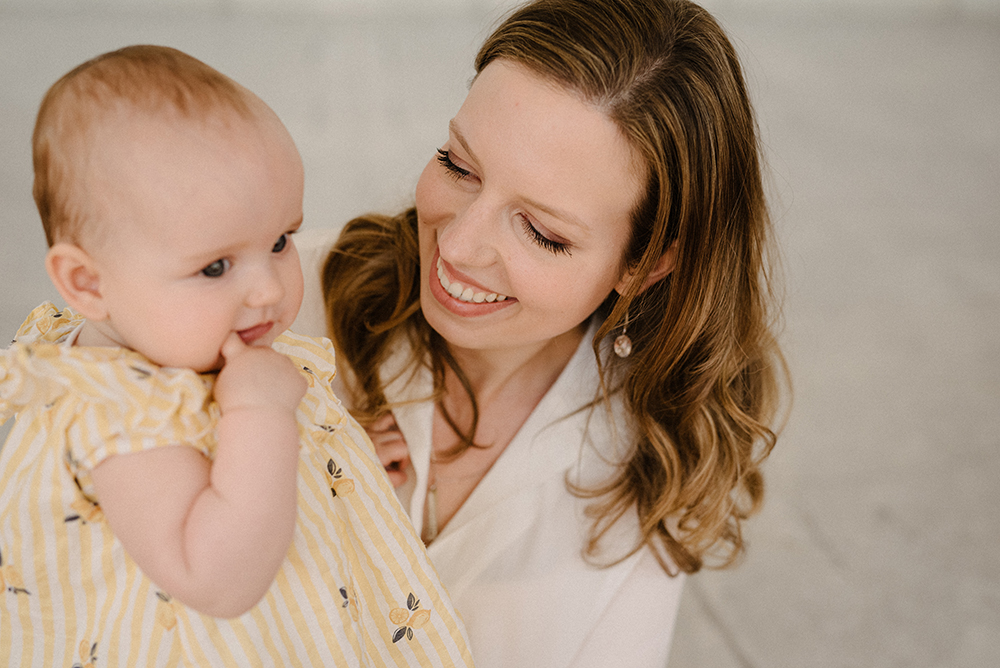 This explains why her residency with the Opéra de Montréal began in January rather than in September, and her husband took over at home while Mom went out to work with heart and dedication. “I am very lucky. I was working hard alongside fantastic people and I know that my daughter was doing great with her dad. I don’t have many women role models who are in the same place as I am in their professional lives and who combine career and family. I was often told it would be hard, so I was a little worried. But I felt I was able to do it, and I am. I feel very privileged.”

The pandemic: making the most of the situation

Despite productions being cancelled, the Atelier strives to provide its proteges with rewarding work opportunities, whether with mentors or various orchestral conductors. “One of my goals in coming here was to gain experience with conductors. In just five months, I had the opportunity to work with four different conductors, despite the current context. It was amazing.”

Against all expectations, the pandemic did not have only just have negative impacts on the musical livelihoods of Atelier residents, as Andrea explains. “I was able to work via videoconference with several coaches, including Liora Maurer of the Metropolitan Opera in New York, whom I probably would never have met were it not for this health crisis. Before Covid, I didn’t even know that working remotely was an option! I learned a whole lot in the space of only a few months. More than anything I could have imagined.”

The coaches and teachers she met helped her to grow into the sensitive and intelligent artist she is. “Michael McMahon, Olivier Godin, Esther Gonthier, all of them were able to effect my rapid progress. Technically, I am a better pianist than when I arrived. I can access many more colours and I am more comfortable in my playing.” The many coaching occasions with her singer colleagues helped her to develop confidence in her own abilities and skills. “The singers are all very open, available, generous and eager to explore. I enjoyed every minute I spent with them!” An Italian diction coach, Zoey Mariniello Cochran, also opened up a whole new world for Andrea. “Her approach to diction is very concrete, easy to apply in coachings with singers. That changed everything for me.”

Feeling the music come back to life

One defining moment of Andrea’s residency took place early on, while she was involved in a Mahler project with Nicolas Ellis and the Orchestre de l’Agora. After working on the repertoire from her own perspective and receiving on-screen coaching, she attended her first rehearsal with the orchestra. “I played the harmonium in the orchestra. I will always remember the first start given by Nicolas: all this music that suddenly came alive around me. It was as though it had been finally liberated, after all those months of silence. I will always remember that moment.” 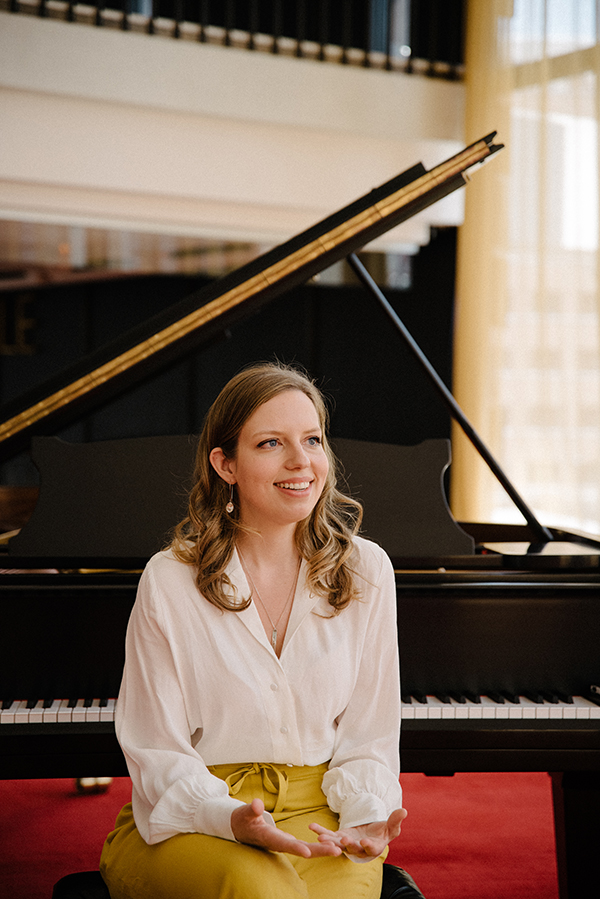 A new beginning across the ocean

Although she had been slated to remain for one more year alongside her Atelier cohort, Andrea’s husband was offered a position that he could not refuse. Destination for the whole family: London. “I’m excited, but also it leaves me with this bittersweet feeling. Being at the Atelier lyrique was the best job I ever had. I love the people here, I have already learned so much and I know that would only have expanded as the months went on. On the other hand, this is a chance for me to settle in Europe. London is a lively city where a lot of music is played all the time. I think I’ll be able to find my way in as a freelancer. The fact that this is happening now, after a few months spent at the Atelier, makes things a whole lot easier. I have much more confidence in myself.”

Will she remain in contact with the Atelier after she leaves? “For sure. I have never worked in such a warm and caring environment, and I made many friends. I am grateful for everything I have been given here and I will always keep an eye on what is going on here. I will come back as often as I can, as soon as the pandemic is behind us.”