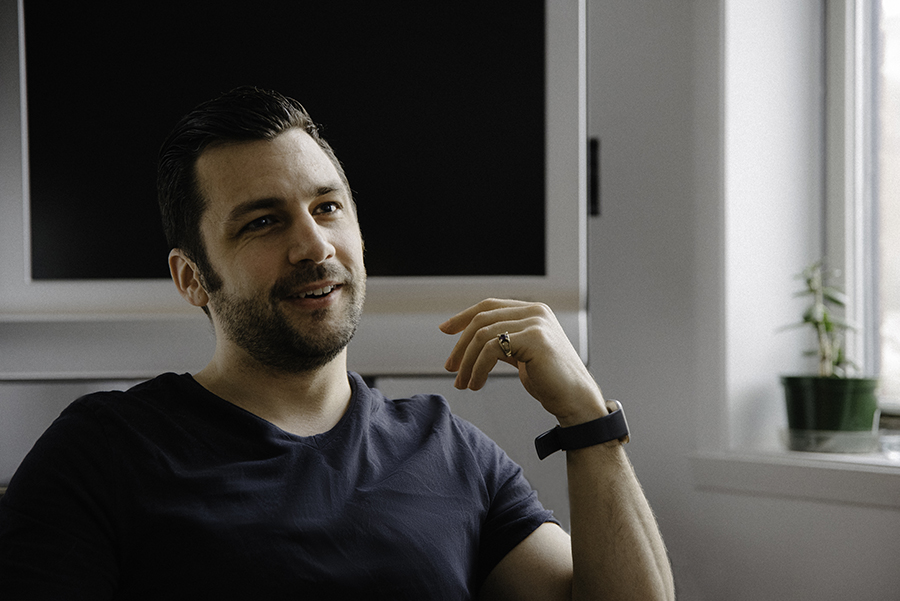 This singer who hails from Quebec City welcomed us in his apartment with a delicious bruschetta. “I used to work as a sous-chef in an Italian restaurant,” he explained. Over appetizers, Jean-Philippe told us about his background, from his admission to the Conservatoire de Québec to his imminent departure from the Atelier lyrique. This is a portrait of a hard-working young man who has been guided along the way by key encounters.

Finding his way through music

Jean-Philippe’s musical adventure began with … wanting to impress a young woman. “I had a crush on a girl who sang, so I enrolled in singing lessons. My teacher told me I had a good voice and asked me if I wanted to study at the Conservatory. I wasn’t exactly sure where I was headed in life, so I thought, ‘singing opera and travelling the world, why not?’ When I passed the audition, I didn’t even know what solfège meant.”

Though romance with his love interest never materialized, he owes her a debt of gratitude: his discovery of the opera stage.

Hands reached out to help

During his undergraduate studies at the Conservatory, Jean-Philippe made the acquaintance of his singing teacher Jacqueline Cistellini, who became something of a second mother to him. While studying at the Conservatory, he also met pianist Martin Dubé, who took him under his wing, bringing him to New York to take part in workshops and to work with Marlena Malas. “He is like a father to me.” For his part, Michael McMahon, a singing coach he works with regularly in Montreal, guided him to further studies at McGill University. “When I lived in Quebec City, I would save all my money so I could take as many coaching sessions as possible with him. It is thanks to Michael that I came to Montreal to do my Master’s degree and Artist diploma. He is much more than a mentor. He has become a friend.”

Whether coaches, mentors or simply well-wishers, the people who came his way from the moment he chose his career motivated him to continue down that path. “Sometimes, when I doubt myself—we all go through hard times! —, I remember where I come from. And I think of all these people who were by my side from the beginning, people who checked in and supported me since my studies at the Conservatory, who believed in me, so I tell myself I cannot give up.” 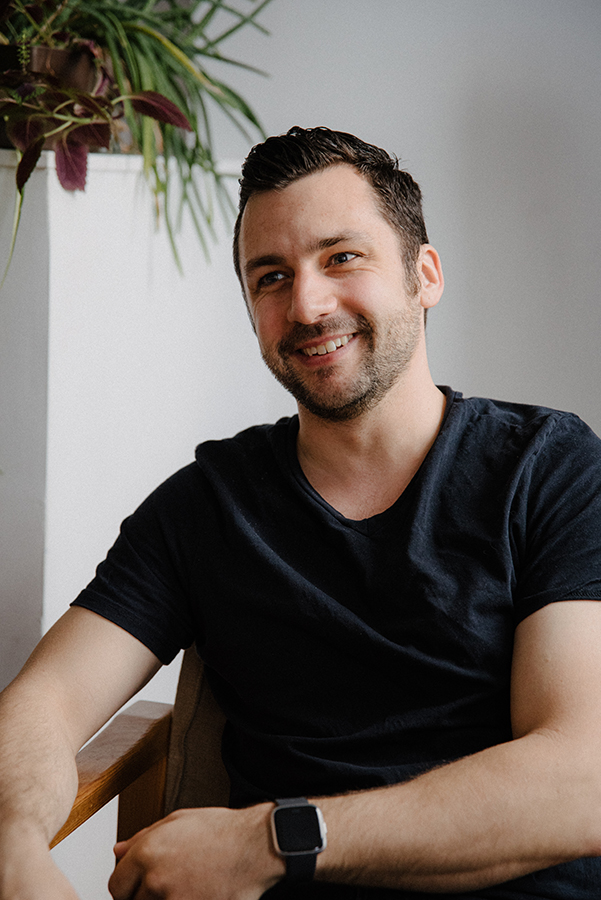 The third time was the right one

Upon completing his studies, Jean-Philippe attempted twice to gain admission to the Atelier lyrique, without success. “I moved on to doing other things and worked full time to save up and go to Europe.” It was Marie-Ève Scarfone, currently Head Vocal Coach at the Atelier, who convinced him to audition once more. Proof that one should never give up in the face of as-yet unfruitful efforts: his third try was the right one, and he joined the institution in 2019.

Jean-Philippe realizes how fortunate he is, through the Atelier lyrique, for the opportunity to foster valuable connections. Artistic connections, but also, and mainly, human connections, starting with the team of the Atelier and the Opéra de Montréal.

“Everyone is warm and welcoming. Last year, I sat down for lunch every day with Michel [Beaulac], Catherine [Levac] and Chantal [Lambert], and it was always a lot of fun. That is something I miss with COVID, even though I can call Chantal any time to speak to her about anything. She’s also very nurturing like a mom: she’s always there or us.”

In recent years, the Atelier lyrique has also provided a sponsorship system which pairs each young artist-in-residence with a donor. Through this program, Dr. François Loubert came into this endearing bass-baritone’s life. “We developed a very nice bond: I know his family, we play chess online together, I speak to his children via videoconferencing, I sometimes give concerts at their chalet or spend the weekend there. It’s not at all a patron-protégé dynamic. I’m sure I will remain in touch with him for the rest of my life!”

Among the many opportunities offered by the Atelier, Jean-Philippe highlighted several that made a profound impression on him. From his collaboration with Nicolas Ellis to his involvement in a production of Fidelio conducted by Yannick Nézet-Séguin, through which he made the acquaintance of Luca Pisaroni, a singer whom he greatly admires, he relishes and discovers all he can from each experience. He has also learned a lot from his contact with neuropsychologist Guillaume Dulude, who was immensely helpful to him during the confinement period. 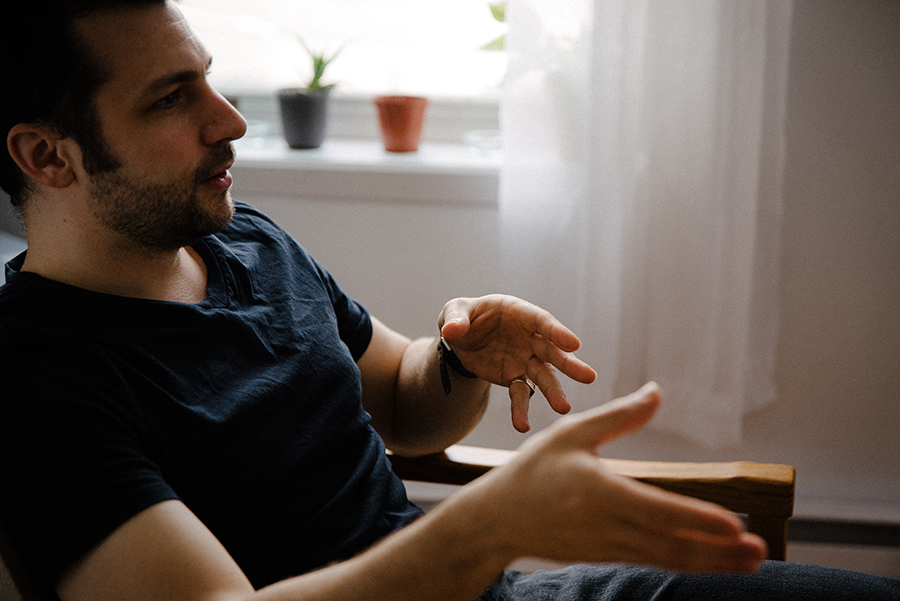 The pandemic: valuable time to refocus

What was shaping up to be the greatest year of his life, according to the singer—a year packed with concerts, productions and auditions—was completely disrupted by restrictions brought on by the pandemic. Something which, nevertheless, turned out to be beneficial. “It was an opportunity that isn’t likely to reappear in my lifetime: a year to refocus on myself and work on my technique.” He took online lessons from singing teacher Daniel Okulitch. “I have wanted to work for a long time with a man whose voice is a bit similar to mine and with whom I can identify. It was quite a discovery! I have been working constantly with him ever since. And I may not have had that opportunity, were it not for COVID.”

He has also seized upon this newfound free time to dive back into reading. Vocal technique, Italian diction, the German lied, Schubert, Mozart … the subjects are endless. “It’s very inspiring! After reading, when I’m performing a piece, I can better understand where certain things originate.”

Moving to the Old Continent

Public health conditions permitting, this bass-baritone will fly to Europe this summer. “I will be singing at the Verbier Festival in Switzerland, then meeting up with conductor Fabrizio Ventura, whom I met during the Opéra de Montréal production of Lucia di Lammermoor, to work with him for two weeks on the role of Figaro in Biel. Then, I would like to move to Germany.” The only complication is the visa suspension policy issued by the government. “I am staying on top of the situation. Let’s just say that my plan will be built as I go!”

Why does Europe attract this young singer so much? “Every time I set foot there, I am truly happy. Everything is beautiful there; the architecture is magnificent. Even music is different.” As a proponent of the Classical and Baroque eras, more avenues seem to open up for him on the other side of the Atlantic. “If I’m working on a Gluck aria over here, people say, ‘where on earth will you be singing that?’ It’s less standard for opera houses to produce this kind of repertoire in North America.” But in the end, all Jean-Philippe wants is to sing the music he loves and feels good with, whatever that music may be.

Until we meet again

As he steadies himself to leave the Atelier lyrique fold, this singer will be saying “goodbye for now” to a true family. “It’s certain that if I come back to sing with the Opéra de Montréal, it will feel like coming home. I am at home here!”