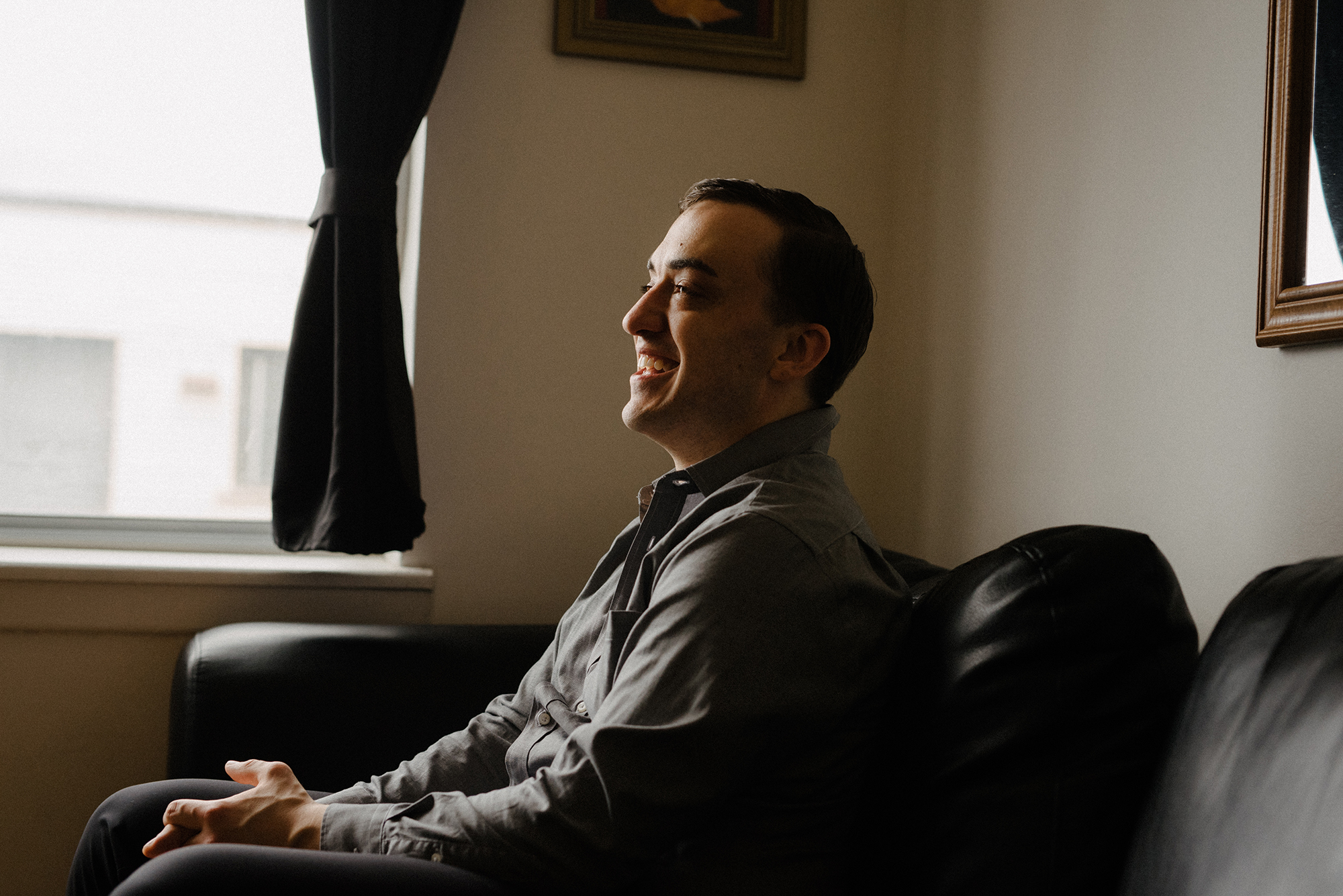 A native of Minnesota, Geoffrey Schellenberg journeyed to the American and Canadian west coasts before settling in Montreal in 2020, amid the pandemic, to enter the Atelier lyrique de l’Opéra de Montréal. It was unexpectedly love at first landing: he was captivated by the city’s charm and felt almost immediately at home.

An interview with this passionate, intellectual, hard-working and endearing artist!

From science to opera

Though he grew up in a family where music plays an important role—his father holds a doctorate in music education—the idea of pursuing a career in music never felt like the obvious route. While he played the cello and sang for the fun of it in his youth, this young man, of dual American and Canadian citizenship, set out for Vancouver with his twin brother to go study … chemistry. “At that time, I still didn’t know what I wanted to do with my life.”

The University of British Columbia has a substantial music department and Geoffrey quickly gravitated to it, taking part in increasingly more productions, through which he made new friends. Alongside his scientific studies, he registered for a minor in music. “I soon began to spend 6 to 8 hours every day in the music department while I was still officially a chemistry student!”

As one thing led to another, he enrolled in singing lessons, then auditioned to join the voice program the following year and was accepted. And, of course, the rest is history!

After completing his studies at UBC, this busy baritone did not take any time off. “Right after my master’s, I was part of the Calgary Opera’s McPhee Artist Development Program for one year, then I was accepted into the Portland Opera Resident Artist Program, in Oregon, close to where I grew up. During these two residencies, I picked up some stage experience, and I was offered some great roles. Unfortunately, the pandemic happened and many of my performances were cancelled.”

Amid this upheaval spurred by COVID-19, Geoffrey auditioned for the Atelier lyrique de l’Opéra de Montréal. “I am so happy to have been admitted! I enjoyed every single minute here, and I discovered in Montreal a life and a culture that are completely different from anything I expected. It’s a fantastic city!”

The Atelier lyrique de l’Opéra de Montréal: in the right, place at the right time

Looking back on the past two years, the singer stated without hesitation that the Atelier lyrique was in every way the very program he needed at the precise time he joined it. “I knew it was the right program, but didn’t know just how right it would turn out to be.”

What made it so fitting? Its perfect balance between vocal training, stage experience and networking. “And the Atelier lyrique excels in all these aspects.” Its advantageous geographical location is also undeniably an asset for young singers who reside here. “The arts hold a significant place in Montreal, there are a lot of concerts, and people are curious and happy to discover new voices. There are also many opportunities to audition for different conductors and different ensembles.”

Geoffrey is not short on praise for the faculty who guided him throughout his residency. “Ariane Girard, my voice teacher, and Esther Gonthier, my pianist coach, have completely transformed my way of singing and of being an artist. I have never improved as much as I have in the past two years. All the professionals I worked with here are amazing. I have only good things to say!”

Offering young artists a secure and stimulating environment, strong support and resources on hand, the Atelier lyrique fosters a working climate of genuine camaraderie rather than unhealthy competition. “By wishing everyone succeeds and surpasses themselves, the team encourages a good rapport between colleagues and instills a certain peace among the singers. Here, I am allowed to work hard and improve, but I never feel that I am being overworked or pressured.”

The Magic Flute: an unforgettable experience

Several projects with the Atelier made a significant impact on this singer’s development, but the very last one of his residency and of the Opéra de Montréal’s 2021–2022 season was quite different from anything he has ever experienced.

The production of The Magic Flute for which he took on the role of Papageno as an understudy, has already been performed around the world and was well received wherever it went. “The staging is very different than in more traditional productions because there are lots of projected images. The performers have to coordinate their movements with these images.”

While in most productions, the understudies are often seated during rehearsals and taking notes, this was a whole new situation. “We were lucky to be quite active during rehearsals and to get to sing our roles many times. I’ve lost count! Because of COVID-19, the chances were higher that we understudies would have to hit the ground running and jump up on stage, and since all movements on stage have to be adjusted as you go, we needed to practise in the space. The fact that they gave us the time, the trust, and the opportunity to rehearse, both musically and theatrically, was special, and it was an incredible learning experience.”

Since his voice is suited both to Italian and French opera, this baritone’s favoured repertoire is vast. His perfect pitch and experience as a cellist also dispose him to sing contemporary music, of which he hopes to eventually perform more. Despite all this, the role of Figaro in The Barber of Seville holds a very special place in his heart, and he cherishes the dream of one day performing it on one of the world’s prominent stages. 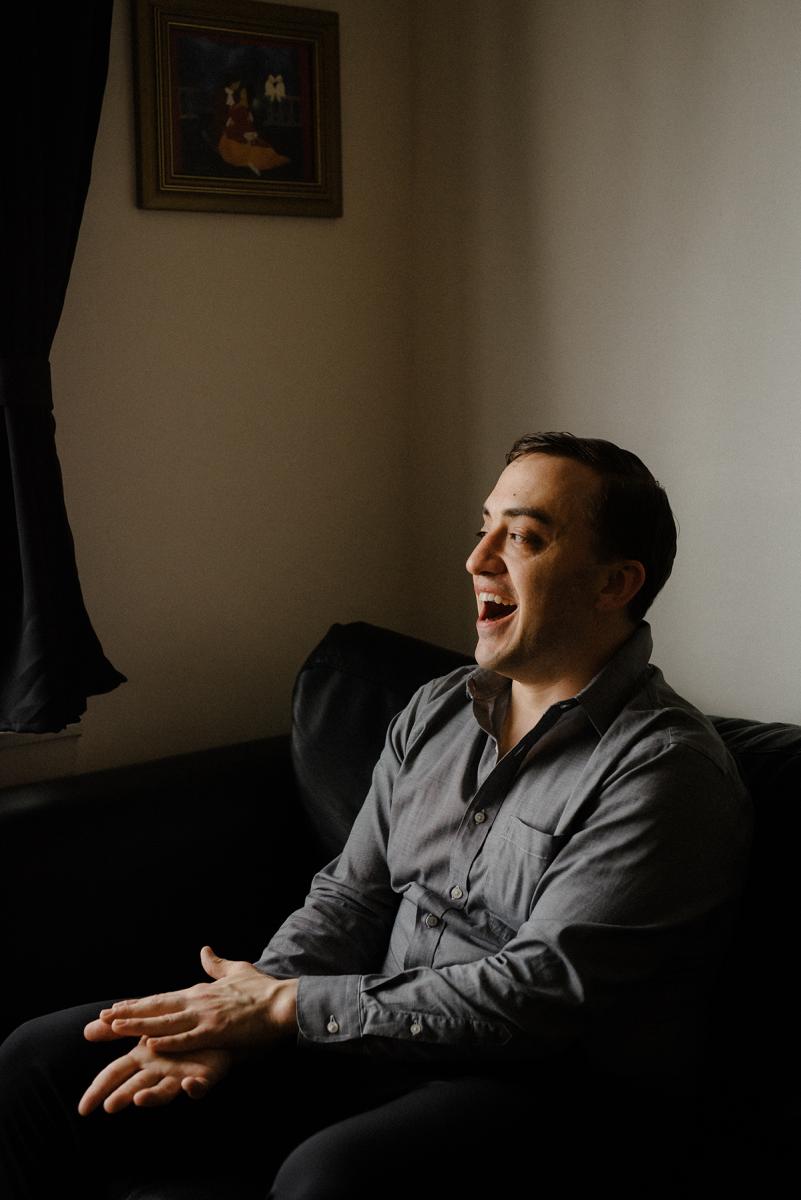 His already packed schedule says it all: Geoffrey’s post-Atelier days will be very busy. This summer, he is off to sing with the Saskatoon Opera before joining the Brott Opera’s production of La Cenerentola. In August, he will sing Eugene Onegin with the Highlands Opera Studio before returning to the Opéra de Montréal stage throughout the next season. While continuing to perform, the singer is also set to begin a doctorate at the Université de Montréal in the fall. “I love to learn, I am a curious person, and there is a strong tradition of education in my family. I certainly inherited it! I always wanted to pursue a PhD, and I’m glad to be getting started on it soon.”

Since he plans to remain in Montreal for some time, it’s sure that this baritone will maintain his felicitous connection with the Atelier lyrique de l’Opéra de Montréal. “We will be in close contact next year, and I hope that will continue!”