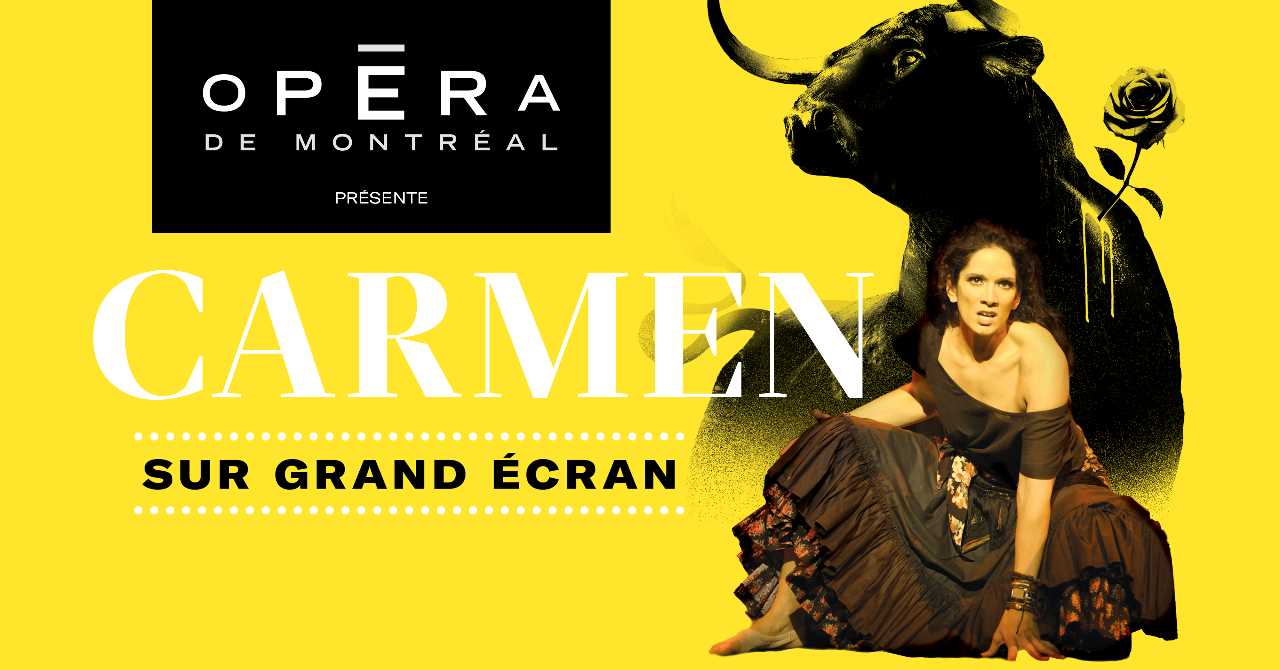 Montreal, October 30, 2019 – Twenty-six multidisciplinary venues throughout Quebec will be showing our most recent version of the opera Carmen on their screens on Sunday, February 23, 2020, as part of the Une Carmen pour tout le Québec! event.

The screening, produced by Pierre and François Lamoureux, comes following the recording of this opera, presented by the Opéra de Montréal at Place des Arts in May 2019. Directed by renowned filmmaker Charles Binamé, and performed by an all-Canadian cast, this screening will be the first of its kind for the Opéra de Montréal.

This pilot project stems from the ministère de la Culture et des Communications du Québec’s (MCCQ) reflection on the recording and broadcasting of live performances throughout the province. Opera is the art form that least often gets the opportunity to make its way through Quebec, usually due to technical or budgetary reasons. Yet, opera is very much in demand throughout the province, where Metropolitan Opera broadcasts, among others, enjoy great success, despite the fact that the works presented rarely feature local artists.

It is within this context that the Opéra de Montréal is seeking to underscore its great interest in contributing to the MCCQ’s recording and broadcast efforts, particularly in light of the company’s new strategic guidelines, which will increasingly focus on local stories and creators.

Télé-Québec’s La Fabrique culturelle – Partner of the Carmen experience
To complete the audience experience at screenings of Carmen, the OdM and Télé-Québec’s La Fabrique culturelle have teamed up to present two short videos. Produced by La Fabrique, the videos showcase the OdM’s educational and community-based missions. Before the show, the first video will prepare the audience for its operatic experience by providing some background on the work, as presented by Pierre Vachon, the Opéra de Montréal’s Community Engagement and Education Director, and Charles Binamé, the director of Carmen. A video presented during intermission focuses on the all-new inclusive YO’péra project, initiated by the OdM, which allows some fifteen young people struggling with mental health issues to become the artisans, artists, and performers of an opera inspired by an existing work. This project is carried out in collaboration with the CHU Sainte-Justine.

Some venues will also hold a talk before the screening.

Equipping the presenters
Metadata is a powerful tool for the marketing of cultural offerings in the digital era. It is in this regard that we put some thought into the best way to describe the Une Carmen pour tout le Québec! event—using metadata—to equip venues for the promotion of such an event. We gave Christian Roy, Consultant, Brix Labs a mandate to develop a Good Practices Guide on Descriptive Metadata for the Screening of an Opera Performance, adapted to the practical commercial realities of the cultural sector. The guide presents suggested practices, but with a pragmatic side, adapted to currently available tools.

See the Guide (in French)

The production Carmen
Charles Binamé’s singular creative process, which involved exploring the characters with the soloists for over a year, required a cast made up of Canadian singers who were open to taking a fresh look at this great classic of the repertoire. Heading up this all-Canadian cast, mezzo-soprano Krista de Silva portrays the famous gypsy, with tenor Antoine Bélanger in the role of the transfixed corporal Don José. Baritone Christopher Dunham appears as the toreador Escamillo and France Bellemare—one year after making her Metropolitan Opera debut—sings the role of Micaëla. Mezzo-soprano Pascale Spinney and soprano Magali Simard-Galdès—two young graduates of the Atelier lyrique de l’Opéra de Montréal who today enjoy enviable international careers—complete the trio of bohemians, singing the roles of Mercédès and Frasquita respectively. Bass-baritones César Naassy (Zuniga) and Alexandre Sylvestre (Moralès), tenor Éric Thériault (Remendado), and baritone Dominique Côté (Le Dancaire) complete the cast.

In addition to directing this new production, filmmaker Charles Binamé also adapted some of the work’s dialogue. His colleague and friend, conductor Alain Trudel—a frequent guest of the Opéra de Montréal—leads the Orchestre Métropolitain for this completely unique, “made in Quebec” version of Carmen. In addition to acting as the musical director for this production, Alain Trudel also composed musical interludes to accompany the dialogue in the piece! The Opéra de Montréal Chorus, choristers from Les Petits chanteurs du Mont-Royal, and several dancers and supernumeraries also take part in this large-scale production.

The recording and screening are made possible through the support of:
Conseil des arts et des lettres du Québec
Cinémusica

Carmen is a production of Productions ODM inc.
SODEC

Opéra de Montréal
Well-established in Montreal, at the crossroads of North American and European culture, the Opéra de Montréal acts as a catalyst for the city’s artistic creativity and celebrates Quebec and Canada’s rich vocal heritage, showcasing opera at its most diverse and daring. From great classics of the opera repertoire and innovative new works from home and abroad, to a training program for the finest young Canadian singers and a strong commitment to the community and to education, the Opéra de Montréal offers unforgettable operatic events at which everyone is warmly received and feels welcome.