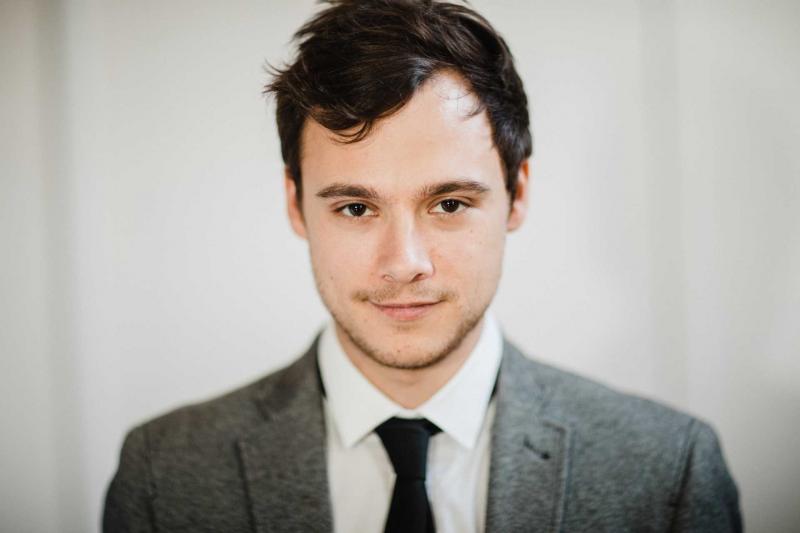 Nicolas Ellis is the Artistic Director and Founder of the Orchestre symphonique de l’Agora in Montréal, an orchestra who’s mission is to organize benefit concerts for humanitarian organizations. Since the beginning of the 2018-19 season, Nicolas holds the position of Artistic Partner of the Orchestre Métropolitain in Montréal.

His recent engagements have brought him to work with the Filarmonica Arturo Toscanini in Parma, the Camerata Salzburg, the North Czech Philharmonic and the Orchestre de la Francophonie. At the invitation of Yannick Nézet-Séguin, Mr. Ellis conducted a 5 concert tour with the Orchestre Métropolitain in the province of Québec during the summer of 2017, which earned him praises from the critics describing him as “a born conductor, a conductor of instinct” — Le Devoir. In addition, Mr. Ellis’s concerts with the Orchestre symphonique de l’Agora were nationally broadcasted on Radio-Canada (2015, 2016). Mr. Ellis was also the Resident conductor of the Orchestre symphonique de Québec between 2015 and 2018 and worked closely with Music Director Fabien Gabel. He was invited to come back as Guest conductor for the 2018-19 season for two subscription concerts.

Conducting fellow at the Aspen Music Festival (2014) and at the Accademia Chigiana di Siena (2013), Mr. Ellis has had the opportunity to work with great conductors such as Robert Spano, Leonard Slatkin, Hugh Wolff, Johannes Debus and Gianluigi Gelmetti. He also took part in a masterclass with Maestro Louis Langrée at the Festival de Pâques d’Aix-en-Provence (2016). He completed his Master’s degree in conducting at the McGill Schulich School of Music in Montréal, where he studied with Alexis Hauser and was a recipient of a Prestigious Schulich Scholarship.

In 2017, Mr. Ellis was also the recipient of the Bourse de carrière Fernand-Lindsay, a $50 000 prize presented biennially to the most promising and emerging Canadian musician by the Fondation Père-Lindsay. He is also the recipient of the 2015 Heinz Unger Award delivered by the Ontario Arts Council. This national award, presented biennially to an emerging professional Canadian conductor, recognizes talent and promise, musicianship, and commitment to Canadian repertoire and Canadian musicians. Nicolas Ellis was named classical revelation of the year by Radio-Canada (2018).

By the end of the 2018-19 season, Nicolas Ellis will have made his debut with the National Arts Centre Orchestra, the Kitchener-Waterloo Symphony Orchestra, Les Idées heureuses, the Orchestre symphonique de Longueuil and the Ottawa Symphony Orchestra. He also conducted the Orchestre Métropolitain (with cellist Jean-Guihen Queyras as soloist) and Les Violons du Roy with whom he made his American debut in West Lafayette (IN) alongside countertenor Anthony Roth Costanzo.

In the summer of 2019, Nicolas will have the pleasure of going to the Verbier Festival, where he will assist maestro Valery Gergiev for three weeks.