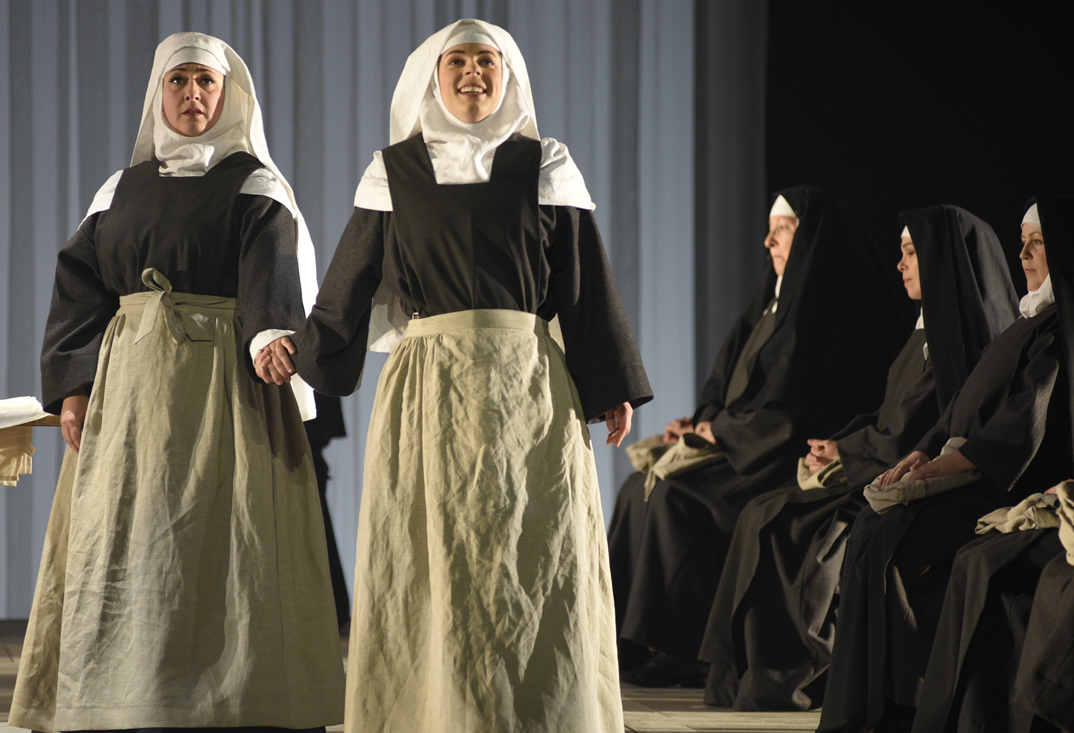 Spotlight on Magali Simard-Galdès, soprano, who sang Frasquita in Carmen last May and who will be heard as Agnès in Written on Skin at the Opéra de Montréal next season.

Magali Simard-Galdès is a young soprano from Quebec who has won acclaim for her shimmering tone, refined musicality, and magnetic stage presence. Having trained at the Atelier lyrique de l’Opéra de Montréal from 2014 to 2016, Magali made her debut this season at the Opéra de Québec in the role of Sophie in Werther and at Opera Lafayette as Louisette in Bonsoir voisin by Ferdinand Poise. She is back at the Opéra de Montréal as Frasquita in Carmen and will be giving a recital at the Société d’art vocal de Montréal on May 26, with pianist Marie-Ève Scarfone.

Active on the recital and concert stage, she has appeared at the Festival d’Opéra de Québec, the Atelier lyrique de Tourcoing (France), the Wexford Festival Opera (Ireland), MexicoLiederFest (Mexico), and Festival Classica (Canada).

Magali benefits from the invaluable support of the Canada Council for the Arts, the Jeunesses Musicales Canada Foundation, the Jacqueline Desmarais Foundation, and the Vancouver Opera Guild.

What was your most memorable experience from your time at the Atelier lyrique de l’Opéra de Montréal between 2014 and 2016?

My most memorable experience at the Atelier lyrique was when Lise Lindstrom—who was appearing in Elektra at the Opéra de Montréal—coached me. I simply asked her at the reception after the Elektra premiere and she immediately agreed to meet with me the following week. Some of the singers and conductors engaged at the Opéra are especially generous with the young artists of the Atelier—and getting advice and comments from this artist who has appeared everywhere, on the world’s great stages, was extremely inspiring and enlightening.

What are some of the challenges of taking on a role like Agnès in Written on Skin, which you will be singing at the Opéra de Montréal in January 2020?

One of the challenges of taking on a new role, like Agnès, involves fully mastering the music and the dramatic development of the character in order to allow yourself to be completely free on stage. It’s an extremely rich score given its complexity, so you’ve got to put in some extra work to give the spectators a clear reading of the musical text and the character, so that they can appreciate the full power of the work. This requires more long-term preparation, like getting ready for a marathon!

Do you have a team of teachers/coaches guiding your development?

Yes, and that is absolutely indispensable, in my opinion! I have a whole team of ears that I trust to guide the development of my voice and my career: Aline Kutan (voice teacher), Michelle Labonté (drama coach), and Esther Gonthier and Marie-Ève Scarfone (music coaches). I work with them as often as possible on everything I sing, in order to perfect it from every angle, and I ask for their advice when it’s time to make more delicate professional decisions.

What role/project has made you most proud since you began your career?

One of the projects I am most proud of is the role of Roxane that I sang in David DiChiera’s Cyrano at Opera Carolina in the fall of 2017. James Meena, the company’s director, had auditioned the young singers of the Atelier in September 2015 while he was conducting at the Opéra de Montréal, and he gave me some very good comments following my audition. He later offered me the role, which was an altogether big challenge, as it was my first lead role. To this day, it’s my favourite role I have sung on stage, as it really fits me like a glove! In fact, Maestro Meena was so impressed with my performance that he immediately re-hired me to sing the role of Gilda in their production of Rigoletto in February 2018. It’s extremely encouraging to get such a vote of confidence from the companies we work for.