From September 14 to 22, the Opéra de Montréal is presenting Tchaikovsky’s Eugene Onegin in Salle Wilfrid-Pelletier.

In recent years, major names on the opera scene have performed the roles of Eugene Onegin and Tatyana. Let’s take a look at (and listen to!) a few of them.

Renée Fleming’s career took off in 1988, when she won the Metropolitan Opera National Council Auditions. This led to a brilliant, thriving career with engagements in the world’s greatest opera houses. She portrayed Tatyana for the first time at the Met in 2007, alongside the great Dmitri Hvorostovsky. 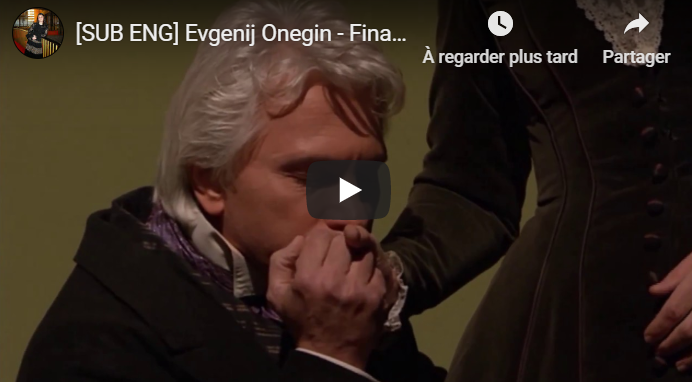 The New York Times’ Anthony Tommasini had this to say: ‘’ You will seldom see better acting in opera then the scenes between Ms. Fleming and Mr. Hvorostovsky. With his white mane, commanding physique and earthy voice, Mr. Hvorostovsky projects charisma naturally, making him perfect for this diffident character.’’ (février 2007) 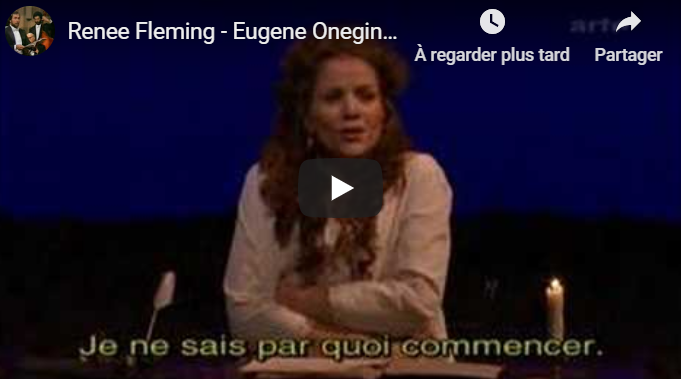 A familiar face on the world’s great stages, he performed at such venues as the Metropolitan Opera in New York, Covent Garden in London, the Wiener Staatsoper, the Opéra Bastille, and the Salzburg Festival. Hvorostovsky was well known for his roles in Russian operas—the title role in Eugene Onegin and Prince Eletski in Tchaikovsky’s The Queen of Spades. For the anecdote, Nicole Car (yes, our Nicole Car) was her Tatiana in 2015 at the Royal Opera House. To see the proof, we must continue reading ...

“Audiences were awestruck by his Eugene Onegin in Paris in 1992” (Le Figaro).

Dmitri Hvorostovsky in Eugene Onegin at the MET: 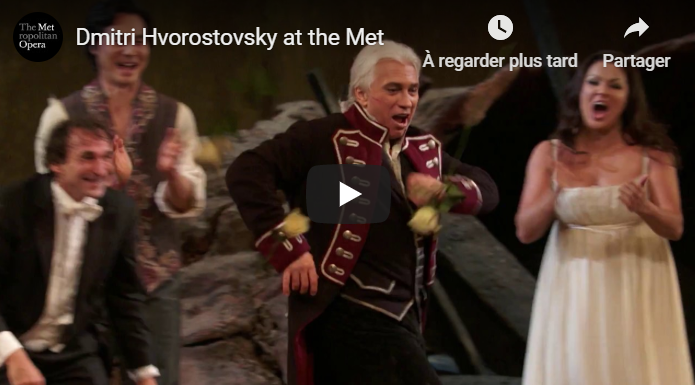 He died in London on November 22, 2017, following an illness, at the age of 55. A few months before his death, he gave a surprise performance at the Met. Listen to the crowd’s reaction as he comes on stage! 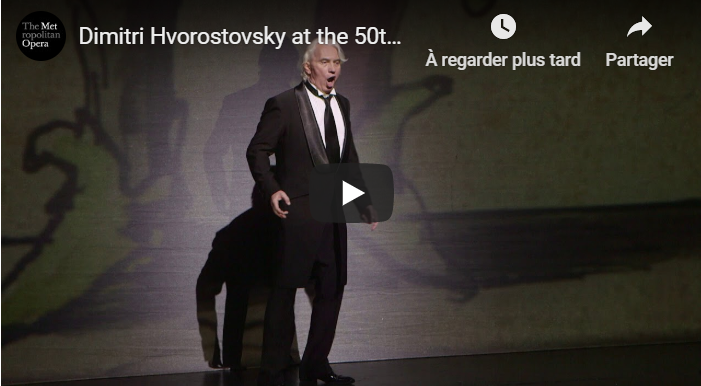 Anna Netrebko is another soprano closely associated with the role of Tatyana. “Starting in 2010, after a final performance of Roméo et Juliette in Salzburg, she began to adapt her career as her voice progressively evolved to a range slightly lower than lirico spinto, venturing into a more dramatic repertoire. She took on the title role of Donizetti’s Anna Bolena in Vienna and at the Met in 2011. That same year, she sang the title role of Tchaikovsky’s Iolanta at the Salzburg Festival, going on to sing Tatyana in Eugene Onegin in Vienna and at the Met in 2013.” (Source)

Anna Netrebko in the finale scene at the MET: 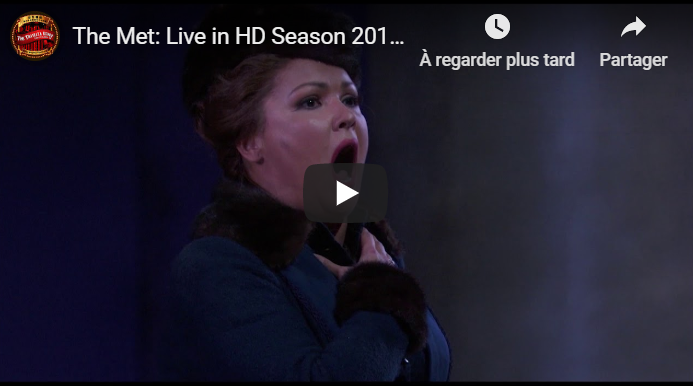 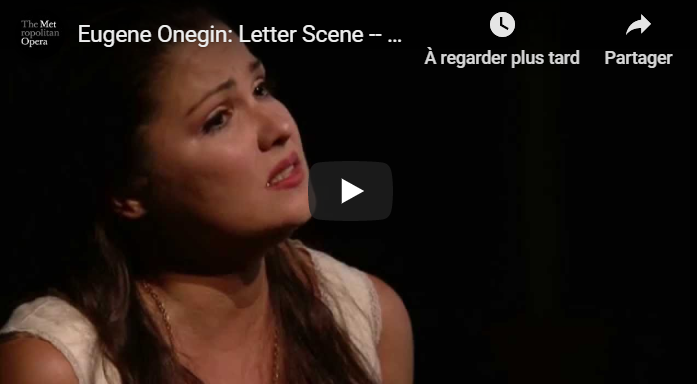 Currently one of the opera world’s hottest couples, Quebec baritone Etienne Dupuis and his wife, Australian soprano Nicole Car, are making their mark as Onegin and Tatyana. Having sung the opera at the Deutsche Oper Berlin in 2015 (which is, in fact, where they met and fell in love), they are returning to the roles in Montreal this September. The baritone—who we know well as Don Giovanni, Valentin (Faust), and Marcello (La bohème), among others—is beginning to make a name for himself as Onegin.

By the way, here is the proof promised earlier: Nicole with the big Hvorostovsky!​ 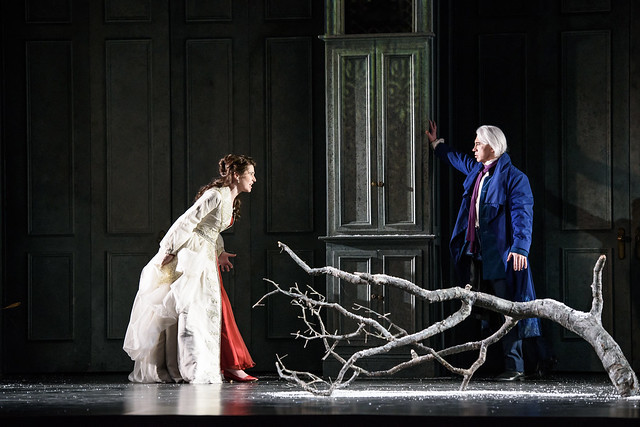 Regarding Nicole, the critics are unanimous: “She’s a wonderful Tatyana, among the best ever, inhabiting the role with great dramatic and vocal surety.” (Tim Ashley, The Guardian, december 2015).
“Vocally, she sounds as fresh and expressive as Tchaikovsky—who preferred young singers in Onegin—could have hoped, with shadows and gleams of light emerging naturally as she sang.” (Richard Bratby, The Spectator, January 2016). 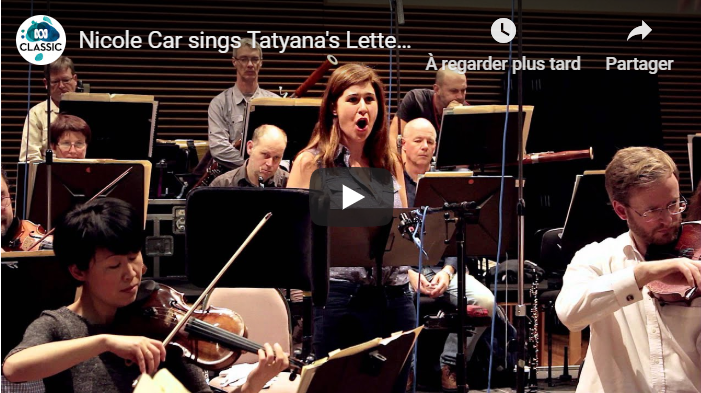 ˃˃ You can see and hear Nicole and Etienne at the Opéra de Montréal on September 14. 17. 19 & 22. Purchase your tickets now!