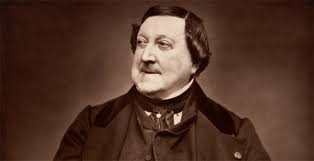 The son of professional musicians, Rossini learned music on the job, playing viola or horn in the orchestras of provincial theatres in which his mother sang. Almost self-taught, he began to compose at a very young age, with the Sonate a quattro written when he was 12, and a first opera at the age of 20. After an official debut in Venice in 1810, Rossini gradually made a name for himself throughout Italy, in both the dramatic (Tancredi, 1813) and comic (The Italian Girl in Algiers, 1813) genres. He was soon a success in all of the major European capitals and, at 23 years of age, was considered to be the greatest living composer. At the height of his glory, Rossini drew inspiration from Shakespeare (Otello, 1816), Walter Scott (The Lady of the Lake, 1819), Racine (Ermione, after Andromaque, 1819), Perreault (Cinderella, 1817), and even the bible (Moses in Egypt, 1818). He then settled in Paris, where the king engaged him as official composer. He first offered Parisians a comic work, Le comte Ory (1828), followed by a great romantic opera based on Schiller, William Tell (1829), which has remained famous, above all, for its brilliant overture. Then, to everyone’s surprise — perhaps the victim of what we would today call a burn out —, Rossini gave up the stage. Always a somewhat distressed person hiding behind the mask of a bon vivant, Rossini was, nevertheless, a relentless hard-worker who composed 39 operas in 19 years, constantly revising, correcting, and adapting them. He only broke his musical silence to compose a few additional works, mainly a Stabat Mater, a Petite messe solennelle, and some piano pieces he entitled Sins of Old Age. He died in 1868, idolized and showered with honours. His work was more or less forgotten for close to a century before seeing a rebirth beginning in the 1950s, thanks to several singers — from Marilyn Horne to Cecilia Bartoli — who specialized as Rossinians. Only The Barber of Seville (1816), an undisputable and universally admired masterpiece, was never forgotten and has remained — since its somewhat chaotic beginnings — a pillar of the repertoire.