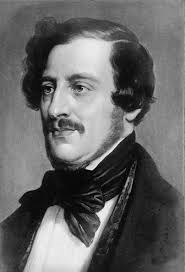 Gaetano Donizetti (1797 – 1848) was born in Bergamo, where he began his musical education. While stationed with the army in Venice, his first two operas were so well received that he was discharged so that he could devote himself completely to music. From 1822 to 1828, he produced a string of successful operas, culminating with Anna Bolena (1830), which established his international reputation. Two years later, L’elisir d’amore scored a success in Milan. A series of notable operas then followed, including Lucrezia Borgia (1833), Maria Stuarda (1834), and Lucia di Lammermoor (1835), perhaps his most popular work. Some years later, La fille du régiment and La favorite were well received in Paris. Though his early operas were often written to accommodate the talents of a particular singer, the composer’s dramatic instincts took precedence over sheer vocal display as he matured. By the time he completed his last well-known opera, Don Pasquale (1843), his mastery of the drama was complete. In a little over 25 years, Donizetti produced more than 70 operas, playing an invaluable role in the development of the genre in Italy, planting the seeds that enabled it to flourish in the latter half of the 19th century.