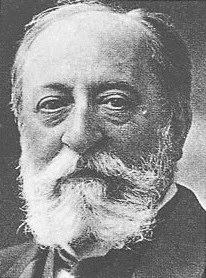 In his collection of writings Harmony and Melody (1885), Saint-Saëns noted: “Fundamentally it is neither Bach, nor Beethoven, nor Wagner I love, it is art. I am an eclectic. This is perhaps a great defect, but it is impossible for me to correct: one cannot change one’s nature.” A pianist, organist, composer, editor of early music, music critic, and frequent traveller, Saint-Saëns indeed had more than one string to his bow and a wide range of interests and sources of inspiration, in music as in life.

A young virtuoso, he began taking piano lessons at the age of 3, composed his first songs for voice and piano at age 6, and gave his first public concert—to great success —at just 10 years of age. Two years later, he entered the Paris Conservatory in François Benoist’s organ class, where he won first prize in 1851. That same year, he went on to study composition with Fromental Halévy. His career path as a composer, however, proved to be somewhat more challenging. In 1852, his failure to win the Prix de Rome lessened his chances of being invited to write an opera—the only way, at the time, to rise to the rank of major composer. It was only 20 years later, in 1872, that Saint-Saëns would finally see one of his operas, La princesse jaune, brought to the stage of the Opéra Comique, in Paris. Of the 13 operas he composed, Samson and Delilah (1877) would be the only one to enter the opera repertoire. An important actor in the rebirth of French instrumental music, Saint-Saëns is principally known today for his instrumental works, like his symphonic poem Danse macabre (1874-1875), the Concerto for Piano No. 4 in C minor (composed in 1875), and The Carnival of the Animals (composed in 1887).

A self-proclaimed eclectic, he took inspiration in works of the past, as well as in an “Elsewhere” imagined during his many trips, as evidenced by his Suite algérienne (1880-1881) or his fantaisie for piano and orchestra Africa (1891). At the same time, his cantata Feu céleste, extolling the glories of electricity and presented at the Exposition universelle in 1900, as well as his role as the first established composer to write a film score (The Assassination of the Duke of Guise, 1908), show that he was very much a man of his time, while resolutely facing the future.