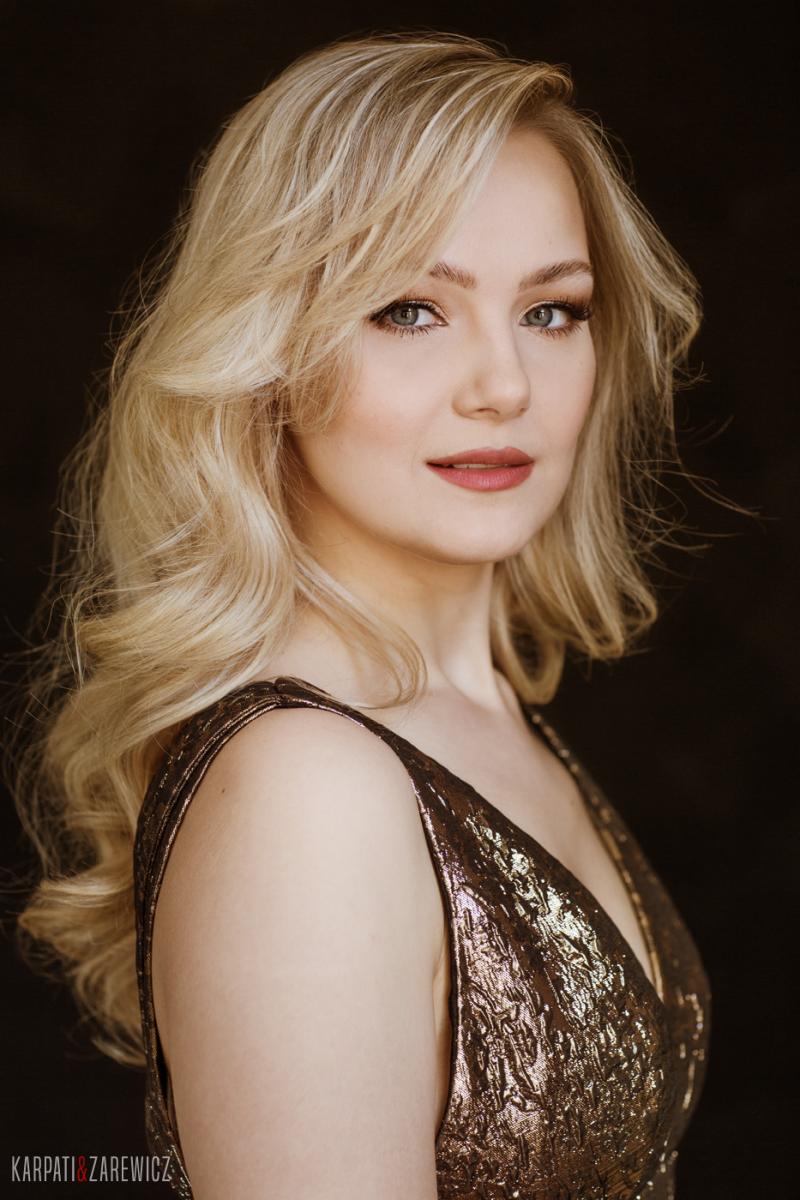 Karoline Podolak is a Polish-Canadian soprano, who has followed a unique career path. She holds an undergraduate degree in Radio and Television and has extensive experience in the Toronto media industry. During this time, she discovered her passion for classical singing through private lessons with Kinga Mitrowska, with whom she studies to this day.

In 2019-2021, Karoline completed a Master’s degree in Opera Performance at the K. Szymanowski Academy of Music in Katowice, Poland, in the solo singing class of Ewa Biegas, where she participated in several master classes with baritone Mariusz Kwiecień.

In November 2019, Karoline had her operatic debut at Silesian Opera House, as Zuzia in the academic premiere of Moniuszko’s Verbum Nobile. Following this success, in January-March 2020, she performed the role of Adele in Strauss’ Die Fledermaus, at Silesian Opera House. Unfortunately, due to the pandemic, further scheduled roles and performances were canceled.

In 2021, Karoline won First Prize at the Polish Academy of Music Tournament at the Grand Theater in Łódź, declaring her the best soprano student in the country. She won the Audience Award at the XVII Great Tenor Gala Festival in Ciechocinek, Poland. She was a semifinalist at Concorso Lirico Internazionale di Portofino, Italy (CLIP), a finalist at the Toronto Mozart Vocal Competition and the Mikuláš Schneider-Trnavský International Singing Competition in Slovakia. In 2022, Karoline won the Toronto-Buffalo District at the Metropolitan Opera Laffont Competition, and won an Encouragement Award at the Great Lakes Region Final.

Karoline was named as one of the 2021 Jeunes Ambassadeurs Lyriques of Théâtre Lyrichorégra 20, where she won several international engagements in the 2022/2023 season, notably debuting the role of Violetta in La Traviata at Bulgaria’s National Opera and Ballet in March 2022; as well as engagements with Opera de San Miguel in Mexico, Teatro Coccia in Novara as Zerlina in Don Giovanni, Germany's Augsburg Opera, Italy’s Bologna Opera, France’s Massy Opera, Bravo Music Chicago in the US, and role study of Norina in Don Pasquale in Luxembourg.

Karoline looks forward to being a young artist of the Atelier Lyrique of Opéra de Montréal in the 2022-2023 season.